Finally, after months of being teased like a fish on a line by marketing spiel and drip-fed reviews, I managed to see the Nick Cave film "20,000 Days On Earth" in a British cinema, having failed miserably to secure tickets for the premiere in London, which had allegedly sold out in advance to the BFI's own members. In fact I was very nearly in the film. My partner and I managed to secure tickets for the Koko gig featured in it but only after registering under a false name as a 25 year old woman (the applications in our own names with our real ages were unsuccessful). However, last-minute childcare commitments prevented our attendance, so we passed them on to a very grateful third party (at the same price, mind).

This odd allocation for the Koko gig seems to mirror Cave's preference for 'connecting' with attractive young girls in his audience, a process whereby he selects and then invites one of the lucky nubiles to place their hand upon his bared chest. This whole scenario reminds me of the Hollywood cliche whereby leading men are allowed to age in the context of romantic or sexual interaction, whereas their female consorts are expected to be young and fresh-faced. Well, it reminds me of that scenario, and also of Peter Stringfellow's dress sense, by virtue of the open-necked shirt and glittering jewellery. Cave seems to be struggling a little with his visual image these days.

My expectations for "20,000 Days On Earth" were high. The reviews seem to have been very positive, and we had been impressed by the opening gig of the "Push The Sky Away" tour which we caught at Brighton. It was a fine performance. Cave is a spirited and agile performer and he has the keen sense to work with some highly talented professionals including Jim Sclavunos, Warren Ellis and Thomas Wydler. Ellis's diabolic wizardry with an electric violin was particularly striking. If he ever played at funerals then I feel sure he could raise the dead. My partner is convinced that Cave rewarded our manic, back row upper circle dance moves with a nod and a wave as he left the stage but personally I'm not so sure. He may have simply been returning my mischievous requests for "Spinning Around" with a subtle two-finger salute. 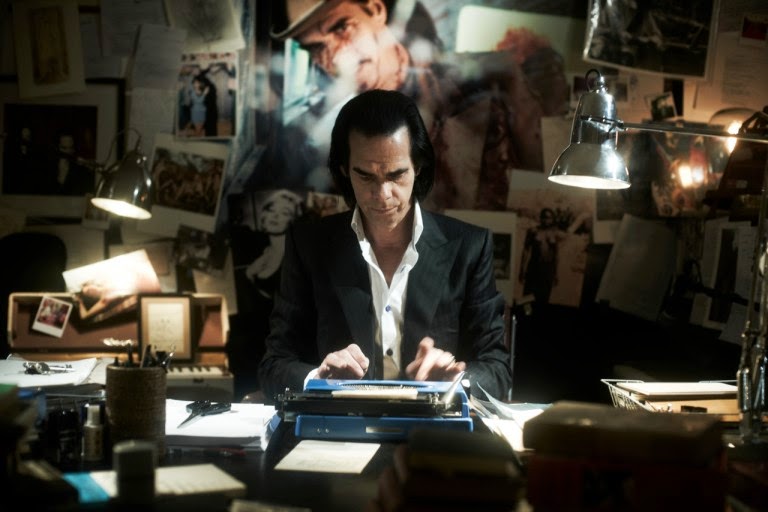 Nick Cave typing a complaint to his tailor

Besides this live excellence there is Nick Cave & The Bad Seeds' outstanding back catalogue. One of the first LPs I ever bought was "From Her To Eternity", and I still know most of the lyrics by heart. Barely a day goes by when I don't listen to a burst from "Murder Ballads" or "Abattoir Blues". The songs 'The Curse Of Millhaven' and 'Nature Boy' make for near perfect driving music.

"20,000 Days On Earth" was only shown for two days and on a small screen at our local 'arthouse' cinema. It therefore played - somewhat predictably - to a packed house. After enduring thirty minutes of loud and tedious adverts, the film finally began, starting approximately ten months after I had, via Facebook, first expressed an interest in seeing it. The circumlocutory route it seemed to have taken before hitting UK screens had contributed quite considerably towards heightening my expectations. Anyway, all griping aside, it started promisingly enough, with a spinning digital clock counting upwards from 0 to 20,000 as the viewer was treated to a barrage of collage, images culled from Cave's life, starting from birth, racing ever onwards through youth towards middle age. But then it cut away to Cave waking in his bed, next to his silent and otherwise absent wife Susie Bick, and as it did so, a sombre and rather depressing gloom descended upon the film, setting the tone for almost everything that followed.

I'm not going to dissect the minutae of the film scene by scene because people can watch it for themselves and form their own judgements. It would also take too much time and I would rather spend it more creatively elsewhere. However, I thought the film failed for several reasons, as follows.

The absence of many key figures was striking. Cave's wife and children were featured but did not contribute anything of their own. His mother was often referenced but was never seen. Mick Harvey was notably absent. Apart from Warren Ellis, the other band members were not invited to contribute anything. No fans were interviewed. The camera never once turned to film the production, and thus reference those behind the lens. In terms of the music world, there was a notable absence of third party heavyweights, fellow performers or music journalists, who could either contribute valuable insights into Cave's work, or else entertain with amusing anecdotes. We weren't even properly introduced to the all-but anonymous archivists who apparently maintain Nick Cave archive.

The aim of the film wasn't entirely clear. I didn't know whether it was meant to be a promotional feature to support the "Push The Sky Away" album or a biographical reflection upon Nick Cave's life. The frequent references to Brighton suggested the former but the vaguely philosophical musings about life, the universe and everything hinted at the latter.

The gloomy narrational introspection was punctuated by a series of odd segments in which Cave was either interviewed by a psychiatrist, or else drove around in a black Jaguar talking with Ray Winstone, Blixa Bargeld and Kylie Minogue. All of these interviews seemed staged and clipped. None of them flowed, none were revealing. The only exchanges which came close to flowing with anything approaching fluidity were those involving Warren Ellis. Ellis comes across as an amusing and pleasant raconteur.

The live footage shot at the Koko gig was disappointing. The snippet from 'Stagger Lee' completely failed to communicate the dark and edgy bass-line brilliance of the song. There were no excerpts from old videos. The penultimate scene shot at the Sydney Opera House, in which the song 'Jubilee Street' built up to a slow and powerful crescendo, was so drawn out and drip-fed that I felt like standing up to shout "Bloody well hurry up and transform then!"

Two things struck me about the production of this film, both linked to statements that Nick Cave made himself. Early on in the film he revealed that the key to (his) writing was 'counterpoint'. He said that the juxtaposition between two disparate things could create something original and exciting. (He didn't use those exact words but it's close enough.) He illustrated this by talking about a scenario in which he would put two things (a child and a bear, I think) into a room just to see what happened, and if that didn't produce something of interest, he would introduce a clown. If that didn't stimulate something then no problem, you could just shoot the clown. It was a funny and clever example, vaguely echoing Brian Eno's 'Oblique Strategies' method of creativity. However, it was clearly not a process favoured when making "20,000 Days On Earth". The film has no counterpoints. It has but one perspective and one agenda, that of the man calling the shots.

The second thing that struck me was this. When talking with Blixa Bargeld, Cave asked his former collaborator whether he thought that some of their earlier work had gone on for too long, and whether it might have benefited from firmer editing. Bargeld agreed, saying that a judicious edit could completely alter a piece of music. Cave added that now he was solely responsible for such matters, he had adopted 'brutal' or 'ruthless' editing techniques (I forget which of the two words he used). I think this is significant. It helps explains why "20,000 Days On Earth" is such a bleak and single-minded production. It hasn't been so much edited as exsanguinated.

The legendary filmmaker D.A. Pennebaker created some memorable films about musicians such as Bob Dylan, Little Richard and David Bowie. What I like about his production style is the free-flowing shooting style which dispenses with authorial narration in favour of fly-on-the-wall observation. In contrast, "20,000 Days On Earth" strikes me as a cheerless alternative in which rather than give free reign to third parties, Cave's editorial presence haunts the film, like the Phantom Of The Opera standing in the wings. Clearly he feels uncomfortable in front of a camera and cannot act to save his life (the notable exception being when he is performing, at which times he seems to come alive). Indeed, Bela Lugosi as a sleeping vampire is perhaps more animated, and arguably more endearing. Furthermore, Cave's bleak midlife-crisis of a monologue hangs over the film like a mist of lead. As the end sequence played out, depicting Cave standing alone on a dark Brighton beach, transforming into what I have yet to discover, I felt like loading my pockets with stones and jumping into the sea, such was the sense of doom and melancholy imparted.

"20,000 Days On Earth" is a bleak, introspective and pretty unilluminating film. It avoids the key issue I thought would be uppermost in Cave's mind, which is that of loss. Indeed, I think it probably is uppermost in his mind, but unfortunately his inability to address the issue head on is disappointing. Instead he flits about the subject touching upon peripheral issues. Cave begins the film by calling himself a cannibal but he stubbornly refuses to take a bite from his own body, and instead feeds upon those around him. Yet like any sensitive person faced with old age, and surely one who has lived in the public spotlight for so long, Cave is probably acutely pained by the loss of his own youth - and by the loss of his looks, the loss of friends, to say nothing of a dwindling excitement in all that life has to offer - but instead of using this platform as a starting point, he talks about the singular fear of losing his memory, a fear that is illustrated by his frequent trips to the 'Nick Cave Archive', and in references to childhood escapades and conversations with his father. This is too selective and too prescriptive. It shines an obfusc light on just one part of the issue.

This is why he needed to cede control over production to an objective third party. It would have drawn this out and centralised it as the theme. This lack of focus is, when taken in the context of his singular reference to a fear of memory loss, rather troubling, as are the constant allusions to his 'transformation' into something unstated and ambiguous. All in all, I thought the purpose and aim of the film to be confusing and befuddling. I am surprised that few critics have picked up on this.

I remain a Nick Cave And The Bad Seeds fan. However, as Cave has pointed out himself, it never pays to meet your heroes, for they always fail to meet expectations.