* Since posting the following I have realised that an earlier American edition of Polidori's 'The Vampyre' does indeed appear to exist. However, there are no copies listed on the US Library Of Congress Online Catalog. *

Book collecting is one of my hobbies. I blame a bookshop in my childhood home town of Brackley. It was they who enlightened me to the true and certain knowledge that the only thing better than reading a book was reading a book in its best possible state. In some cases that means a first edition, no matter how poorly it was produced; in others, that means seeking out a handsome new edition, with attractive illustrations, or else a handsome new binding, perhaps with an informative new introduction.

I am always on the look-out for books. Every shopping trip, every holiday, every dull fag end of a Saturday afternoon, it doesn't matter where or when, I simply cannot help but fill any empty available timeslot with a quick visit to the nearest bookshop, antiques emporium, charity shop or village fete. As a consequence I have bought many dismal books of supreme worthlessness but happily the odd random discovery ensures that this hobby funds itself, thus supporting my belief that money spent on a good book is never [or perhaps better to say 'rarely'] wasted.

This is my most recent discovery. Given the current interest in all things 'gothic' [an interest, incidentally, that I have long sincerely nurtured] I thought it might interest others. It is I believe an unrecorded rarity, and possibly represents the true first American edition. 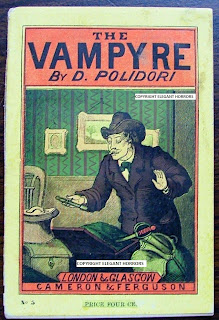 The Scottish publishers Cameron & Ferguson were formed in 1871. Prior to this, George Cameron had been publishing since 1855 on his own, mostly musical titles. According to the available listings at COPAC, their first joint titles were listed as being published in Glasgow, the later titles London & Glasgow. It is likely that subsequent to the inauguration of their partnership that they decided to broaden their scope, which resulted in several different product ranges i.e. 'Threepenny Novels', 'Boys Famous Tales', etc.  The majority of these titles were rousing adventure stories although there are also several fairy-tales and gothic novels.

The titles listed on the rear cover [which, incidentally, do not mention 'The Vampyre'] refer to an 'American Fourpenny Library' but all of the books in this series are priced in British pence, indicating that they were American-themed stories marketed at a British audience, for example, 'The Yankee Scout', 'Rube The Hunter, or The Captive Of The Crow Village'. None of these titles are listed in American cents. The Cameron & Ferguson edition of 'The Vampyre' also features original artwork which clearly depicts a man in a Stetson-style cowboy hat, indicating that it was targeted specifically at the American market. This artwork is uncredited although the initials 'B.T.' appear in the lower left corner of the front cover illustration. On the basis of this evidence, my surmise is that the Cameron & Ferguson edition of 'The Vampyre' was produced for sale only in the USA, and as such, may be the first American edition.

No copies of this edition are listed with any national library in the UK or USA [refer COPAC, Library Of Congress, Yale etc]. Nor is the edition referenced in any reference book at my disposal. Cameron & Ferguson's 'The Vampyre' appears to be an unknown, unrecorded edition, and as such may be the true first American edition, given that earlier recorded editions of the book were published only in London and Paris [refer the first edition, published by Sherwood, Neely & Jones, in London, 1819; the so-called 'second edition', same publisher, but claimed to have been published in Paris, 1830; and also the John Dicks 'Popular Edtion', published in London, 1884, in double-columned magazine format, with a misleading illustration of Lord Byron].

Extremely rare, to the point of 'unheard of'.
Posted by Christopher Richard Barker at 06:04 1 comment: