Features my 40 page short story 'Better Than Borley Rectory', which describes the experiences of a contemporary film crew in the former family home of the quietly famous author of ghost stories, M.R. James. Part homage, part pastiche, the story is predominantly an original work of new fiction. 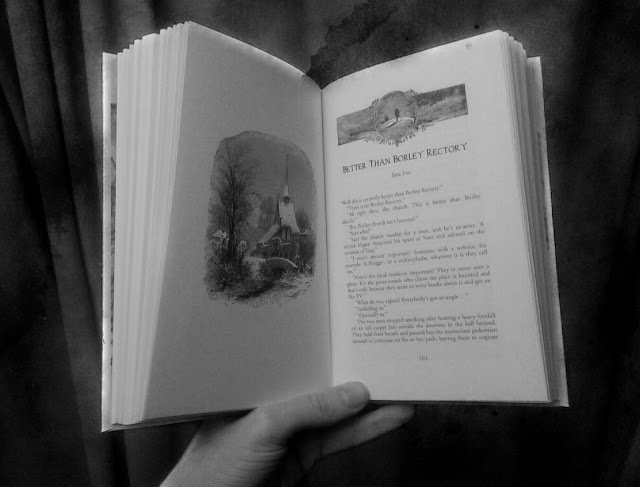 Posted by Christopher Richard Barker at 15:49 No comments:

"...inspired by the 1922 German Expressionist silent film 'Nosferatu', the song's verse includes a dissonant guitar riff, which uses high-pitched notes similar to those in 'Breadcrumb Trail' and a drumbeat based on snare and toms, absent of cymbals. The chorus, featuring 'jagged' distorted guitar and a thrash-influence beat, segues into an extended jam before the song ends with 30 seconds of feedback."

"Last one in isn't a math rockster!"

+ THE VELVET UNDERGROUND: THE MURDER MYSTERY +

" 'The Murder Mystery' is more intricately structured and harder to parse, the closest the Velvets ever came to writing a concerto or symphony. An instrumental intro lays out the two main musical statements of the piece. The spoken/sung lyrics, divided among all members of the band and split cleanly into left and right channels, approach mere gibberish, but also touch on the Velvets’ primary topics—derangement of the senses, violence, body horror, and the nighttime rhythms of urban social life. The Velvets frequently indulged their Dionysian impulses, but 'The Murder Mystery' is possibly their most artfully constructed piece of music, and it’s every bit as impressive as their more chaotic work."

Please note that passengers should be aware that there will be abrupt time-signature changes during the journey in addition to the occasional unexpected piano bridge.

"We're The Sweeney, son, and we haven't had any dinner."

"In the suite 'Paranoid Android,' acoustic and electric instruments float understatedly through the mix as Yorke sings, through clenched teeth, lines like "Ambition makes you look very ugly." Complex tempo changes, touches of dissonance, ancient choral music and a King Crimson-like melodic structure propel the song to its conclusion, where Yorke sings in a pleading voice, "God loves his children." "


Posted by Christopher Richard Barker at 06:03 No comments: 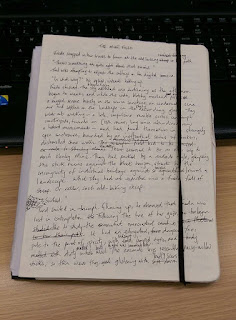 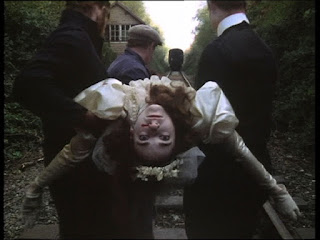 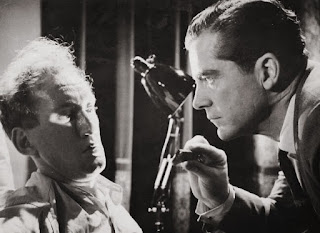 Posted by Christopher Richard Barker at 06:40 No comments:

Clouds over Chesterfield through the car window (green tint applied). 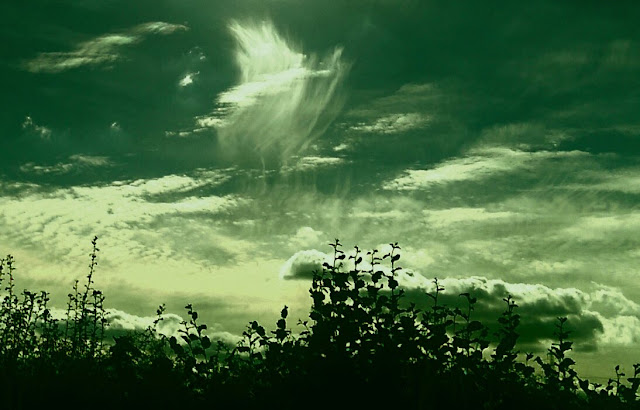 Posted by Christopher Richard Barker at 04:03 No comments: 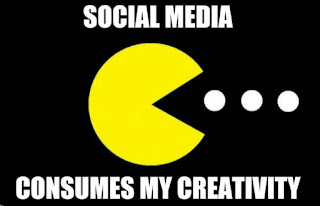 Posted by Christopher Richard Barker at 15:19 No comments: 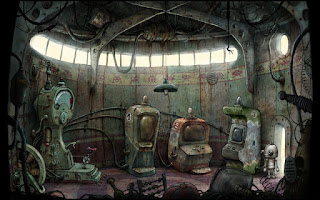 FEBRUARY IS THE SHORTEST MONTH
February is the shortest month,
Stretching to barely four weeks
That is, twenty eight days
Most years (three in four)
Show me the shadow of the proposer, who
Rises to stalk you, on
The 29th of Feb., and
I shall show you a face full of fear.

I, Morrissey, I who have forsaken all
Enacted upon this same patio or decking
You see on all the makeover shews
"Oh push me, Stephen
Push me pull you
Shove me in the rose bed
And let's call it quits"

The judge was a fool
I wrote a song castigating him to hang upon mine own petard,
But I lost it
I lost it
I lost it down the back of
The sofa.
('Of course sir, no animals were harmed during the construction of this'.)
On the advice of my brief – he warned of slander
'Oh just shut and take my money then.'

'Anyway, I said, they don't want to
Sell smut like that in here, not
When there are schoolchildren and grandmothers
Buying jamboree bags and ten Capstan Double Strength
And Panini stickers for their albums, supercars, footballers and the like
I mean it stands to reason don't it'
DO YOU WANT ANYTHING ELSE DEAR?
'Take my Brian for example, he don't want
For nothing in that department
If you know what I mean
Nutu nutu risum risum
Every Saturday it is, regular as clockwork
Always after Match Of The Day never before,
(Thank god for the Bristol Cream I say, Lord knows I need it to get in the mood)
Just as Father O'Brien advocates
You know Father O'Brien
Him what's always got that young cousin staying
You know the one, 'Angel Eyes' the one with the boyish smile
He could almost be a girl
Anyway where was I oh yes should we run out of matches or milk or a visitor call unannounced
(Present company excepted of course
And do pop round for a slice of fruit cake tomorrow, I ground fresh nutmeg special)
Well then I have no choice, do I
"Bry", I say, "Bry love, do be a dear and pop down to the cornershop,'
DO YOU WANT ANYTHING ELSE LOVE?
'It seems we are wanting a drop o' milk."
"Rightyo," he pipes all cheery like,
Paper quickly tossed in the fire familiar slippers briskly closeted,
Skip in his step to the coat stand in the hall because it means
A swift half 'n half at the Jack 'O Knaves
Where it's all
"Who's running at the weekend Desert Orchid you say hmm might be worth a punt"
And:
"How's the missus good good I'm pleased to hear that how's mine you ask well mustn't grumble there's a war on after all ha ha"
(Slaps leg, titters 'n chortles, oh yes there's nothing I don't see)
"Anyway I'd best be off no doubt I'll be seeing you (drum roll) on the other side!"
(Slaps leg again, titters et cackles, exeunt.
"That Brian, he's a card, make no mistake"
"Cunt more like. He still hasn't divvied out them winnings from Spot The Ball even if it were 'is cross what won it.")
But when he comes back I just know
I just know
He's been looking at that top shelf
You know the smut shelf
Where glossy young tarts laugh at your wrinkled yellow marigold life
Stealing husbands' eyes from childfat wives
It's in his eyes, you see, it's in his eyes, that mordant smoulder'
DO YOU WANT ANYTHING ELSE LOVE?
'That unslaked thirst for distant waters
No, I tell him firmly, no
It's fried liver on Wednesday and leftover treacle tart
I'm not dressing up and pretending
To be a wicked nun for you Mr Brian Smallbridge.
And if you don't like it you should have
Married Anne with the blue silk blouse.'
DO YOU WANT ANYTHING ELSE LOVE?
'No thanks Amjay is it all right if I settle up with you Friday
As usual, coo thanks you are a dear
Ta ra love if I don't see you tomorrow for fruit cake I'll see you at the bingo.'

THE WITHERED STALK
Dry caked field iced with mud
Burning sun Latin quotes by Pliny
Homer, Socrates and that other one.
How the stalk craves the light
Is how I crave fallen sight
Blinded, withered, parched, quite
How I run with this dead veg thing
Perplexes me.
I am not a farmer.

A GAME OF SPACE INVADERS
Always always always I said
Always you beat me
Always you hit that flying saucer that blips blips blips along the top
While I
I always miss
Standing beside that electric confession box
Egyptian blue, Prussian, cobalt
(You may have heard of those
But Caeruleus does it for me)
Twisting wrenching zapping alien code
Quickly dashed down coke and puff of a Dunhill
Then back to the purple slaughter, back
Your face reflected lividly upon the shimmering glass
Levantine opal glimmer, ivory missile flash,
Brut, Denim, Old Spice, cheap fag smoke
Bus stop diesel fuming through the draughty door
Chink and tinkle of silver and slotted gold
Is this my youth?
Is this my future?
Your quest for extra lives
'Do you want a go?'
What me
No
I never win
What's the point of taking part when you never win


Posted by Christopher Richard Barker at 08:14 No comments:

I have been reliably informed that my poem "In Every Parting, The Shadow Of Death" will appear later in the year on a new album by the splendid Klanggalerie music label together with an original ambient soundtrack provided by the darkwave / industrial band Attrition. Lines from the poem will also appear in the novel version of 'The Melancholy Haunting Of Nicholas Parkes' I am working on (the book that has thusfar taken two years to almost complete).

My poem is just one of many that will feature on the album. Producing guru Walter Robotka has put together a typically eclectic mix of writers and musicians, all contemporary in nature.

Posted by Christopher Richard Barker at 03:50 No comments: