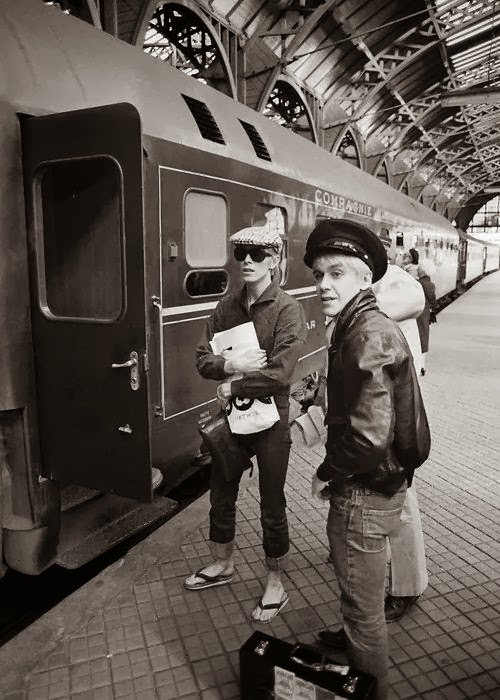 David Bowie spent so much money on drugs that he
had to sell his shoes and travel third class to Berlin to
record "The Idiot" and "Lust For Life" with Iggy Pop.

"Every pleasure which emancipates itself from the exchange-value [of a capitalist society] takes on subversive features."
Theodore Adorno [1903-1969]

A questing intellect requires both diurnal and nocturnal stimulation, all the more an artistic one. Here are three key albums which to me at least exhibit a dark cocktail of psychological emotion. 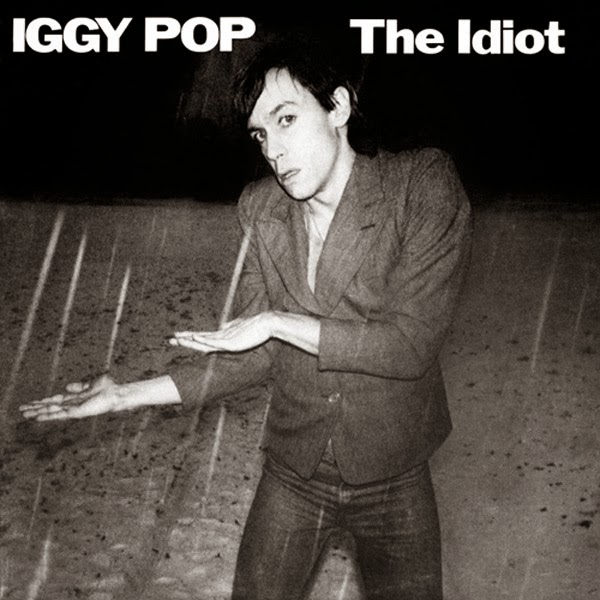 The legendary four albums recorded in Germany in the mid 1970s by David Bowie, Iggy Pop and Brian Eno began with the issue of this landmark work. Described by Bowie as "a guinea-pig for what I wanted to do with sound", The Idiot features material which was both productively innovative and hugely influential. The impact of punk has often been exaggerated; in contrast, the influence of The Idiot is evident in the work of many important bands and musicians, including Joy Division, Gary Numan, Depeche Mode, The Jesus & Mary Chain, Human League, Sisters Of Mercy, Death In Vegas et al.

The Idiot stands out from the other three Berlin albums [Low, Heroes and Lust For Life] because of its dark, hypnotic, cerebrally-corrupting nature. It is dirty, highly-crafted subversion, evoking a sulphurous, poisonous atmosphere, not dissimilar to the nightmarish horrors of Poe's 'The Masque Of The Red Death', or the decadent eroticism of Baudelaire's 'Les Fleurs du mal'.

To quote Nick Kent from the NME:

And when I get excited
My little China Girl says,
"Oh Jimmy, just you shut your mouth."
She says, "Shhhh..."' 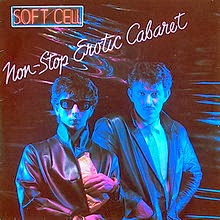 
It is a constant source of amazement to me that this album is not more highly revered. It was recorded very cheaply and very quickly; it features some striking and memorable songs; and the sheer vocal ability of Marc Almond is at times astonishing. Perhaps Soft Cell pitched its subversive context too mischievously, as exemplified by the bizarre and disturbing tracks 'Sex Dwarf' and 'Seedy Films', both of which feature dangerous, arguably irresponsible lyrics, poisonous ideas which nevertheless flow through the mind with an evil, seductive charm.

"Why do you hate me so much? What did I ever do except leave you?"
[Lyrics from 'Secret Life']

'Frustration' is an angst-ridden rant upon middle-aged repression. 'Bedsitter' is a grim 'kitchen-sink' glimpse into the shallow and empty life of the disenfranchised working-class youth seeking escapism via heavy partying.

'I was born
One day I'll die
There was something in between
I....I don't know what or why
I'm a man
I want to break a rule
I am a no, no, no, no, no, no, nobody
Everybody's fool
I am so ordinary 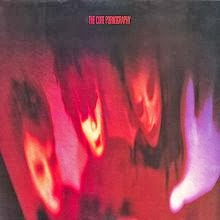 "Arguably the album that invented goth, Pornography was the first of The Cure's 'Trilogy of Doom' that would suck Disintegration and Bloodflowers into its vampiric cataclysms of sound."
[Source: NME]

"It's downhill all the way, into ever-darkening shadows...passing through chilly marbled archways to the final rendezvous with the cold comfort of the slab."
[Melody Maker]

"..a masterpiece of claustrophobic self-loathing."
[Uncut]

Pornography was the album that first wounded The Cure. Fiction Records were concerned about both the title and the hallucinatory, nightmarish wall of sound, which was compared to "Phil Spector in Hell" by NME commentator Dave Hill. The recording process had been an intense, substance-abusing torment, culminating in a surreal nightclub fight between Robert Smith and Simon Gallup, which led to the band's first major split.

The album cover artwork reflects the music within, featuring a distorted, expressionistic photograph of Tolhurst, Gallup and Smith, who resemble embryonic, malevolent clowns shimmering in a blurry, electric womb. Smith holds up his hand, perhaps by way of warning, perhaps in an attempt to connect with a reality beyond his reach.

The creative depth of Pornography is firmly rooted in its lyrical power. Smith's disturbing stream-of-consciousness narratives are liberally splattered with vivid imagery. Here are some random quotes, all of which demonstrate Smith's literary capabilities:

"Sour yellow sounds inside my head."

"Like an old painted doll in the throes of dance I think about tomorrow."

"Catching haloes on the moon gives my hands the shapes of angels."

"Cover me with earth, draped in black, static white sound."

"Move slowly through the drowning waves, going away on a strange day."

These are images that would not be out of place in fiction by J.G. Ballard or William Burroughs.

The tumultuous and crashing sound of Pornography was created during the intense production phase. Apparently the band slept in the studio for three weeks to save money, consuming vast amounts of drugs and alcohol, with tension escalating accordingly. This explains claustrophobic lyrics such as:

"It doesn't matter if we all die,
Ambition in the back of a black car,
In a high building there is so much to do,
Going home time,
A story on the radio."

It's all there in the opening verse, if you look hard enough, and think obliquely: a coruscating castigation of the record company, together with a bitter and sarcastic reflection upon their claustrophobic experiences making the album. They say that to 'write about what you know' is a maxim for writers, and in these lines Smith does exactly that.

It is a perverse quirk of nature that in order to produce a nihilistic and introspective work steeped in dark emotion, the artist must plunge him or herself into that psychologically-wounding environment, and suffer the creative process for our viewing and listening delectation. However, some of us in the audience also suffer, at least those of with sensitive and artistic temperaments do. If Pornography fails to evoke any emotion in you - whether it be horror or despair - then you are either a psychopath or a Conservative [as much as the two can be separated].

Lol Tolhurst's drums on 'The Figurehead' and 'Hanging Garden' resonate in the black night air like demonic bells from the underworld. Simon Gallup's mesmerising bass lines pump alternately with arrhythmic, sluggish unease and frenetic, adrenaline-spurting mania. As usual, Robert Smith plays several of the instruments himself, including the foghorn-like cello on 'A Short-Term Effect'.

Smith has been something of a pioneer in his experimentation with vocal sound, a thirst which was vividly evident on the first Cure album Three Imaginary Boys, an album which served as a palette board that Smith has consistently returned to. In particular, the track 'Three Imaginary Boys' laid down the template for what would quickly become known as the trademark Cure sound. In Pornography his voice is subjected to numerous distortion effects on the mixing desk, as evidenced by the dark watery wobble and sharp concert-hall echo in 'A Short-Term Effect'.

Pornography is a dangerously good album. Smith's waspish lyrics pierce the darker regions of the subconscious mind with poisonous vampire intent. It is probably advisable to avoid it if you are feeling even slightly depressed or suicidal, because it could be the catalyst that will tip you over that fatal slippery edge. Pornography is the artistic equivalent of a deranged, musical collaboration between youthful versions of Edvard Munch, J.G. Ballard and Dylan Thomas, were said individuals to be incarcerated in a studio together for three weeks, with naught but LSD and red wine for nourishment.

Here is the one single that was released from Pornography. If you hate this then do not under any circumstances listen to the rest of the album.

[I hereby promise to write about something nice next time. Well, try.]

Posted by Christopher Richard Barker at 05:43 No comments: 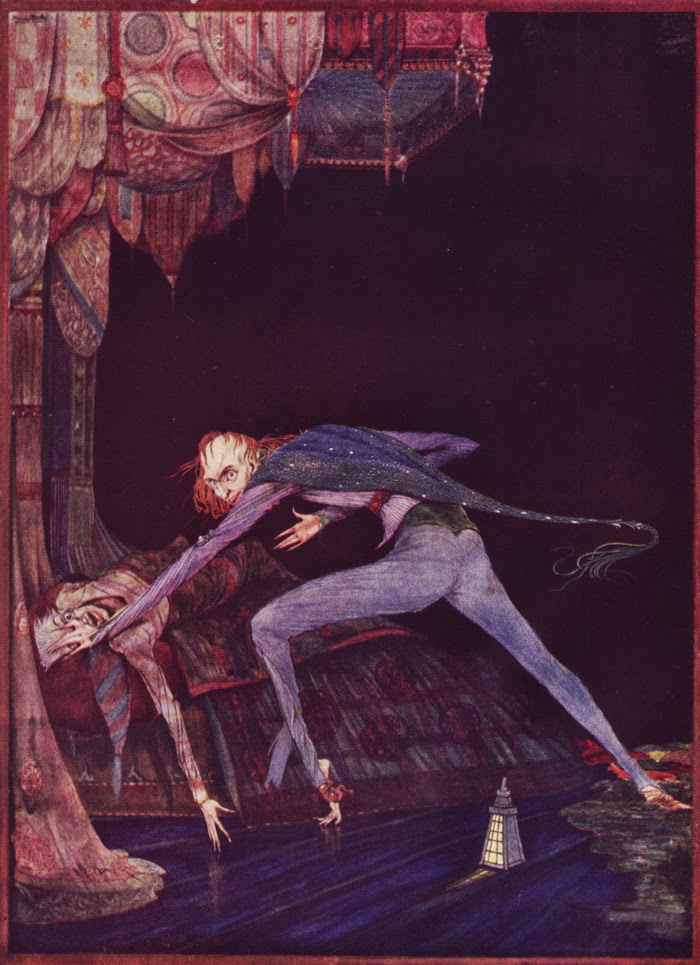 WHILE YOU SLEEP
I hold a knife to your throat
My eyes glint like black fireflies
My broken teeth gleam red
For the pestilent rise and fall of your chest
Symbolises little except poisonous unfulfilment.

WHILE YOU SLEEP
I dream of ways to stop you waking
Imaginary guides whisper advice
Offering implements and opinions
Reality distorted so really untrue
I will wake satiated, but then, then I see you.

Words: CRB
Artwork: Harry Clarke [Out of copyright]
Posted by Christopher Richard Barker at 15:30 No comments:

I am trapped inside my construct
No key out and words, clumsy words fail
Immobile and silent, colourless, worse:
Empty, devoid, disappearing, cursed.

Scattering words, scattering brain
An abundance of choice
Yet [long pause]
Words all the same.

Posted by Christopher Richard Barker at 14:58 No comments:

This is a ten-year old piece which sought to analyse the role of violence [or more specifically, the role of sexual violence] in the work of M.R. James, the noted author of ghost-stories. It originally appeared in the journal "Weirdly Supernatural".

Personally, I find the posthumous deification given to James a little uncomfortable, given the rather obvious undercurrents in much of his work. Critics and scholars appear to be engaged in a strange game of denial, presumably in order to keep James' image wholesome to the undiscerning public.

James' work is powerful yet disturbing. It would help to know why.

NB. Apologies for the original error in uploading these pages in the wrong order. The article should now be in the correct running order. 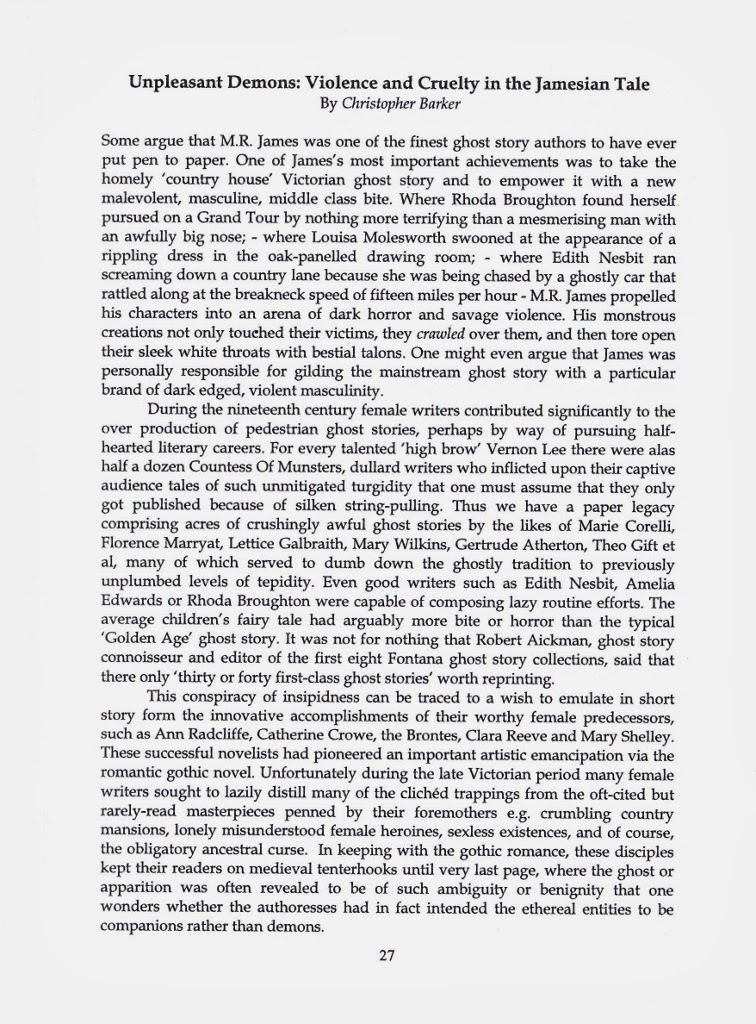 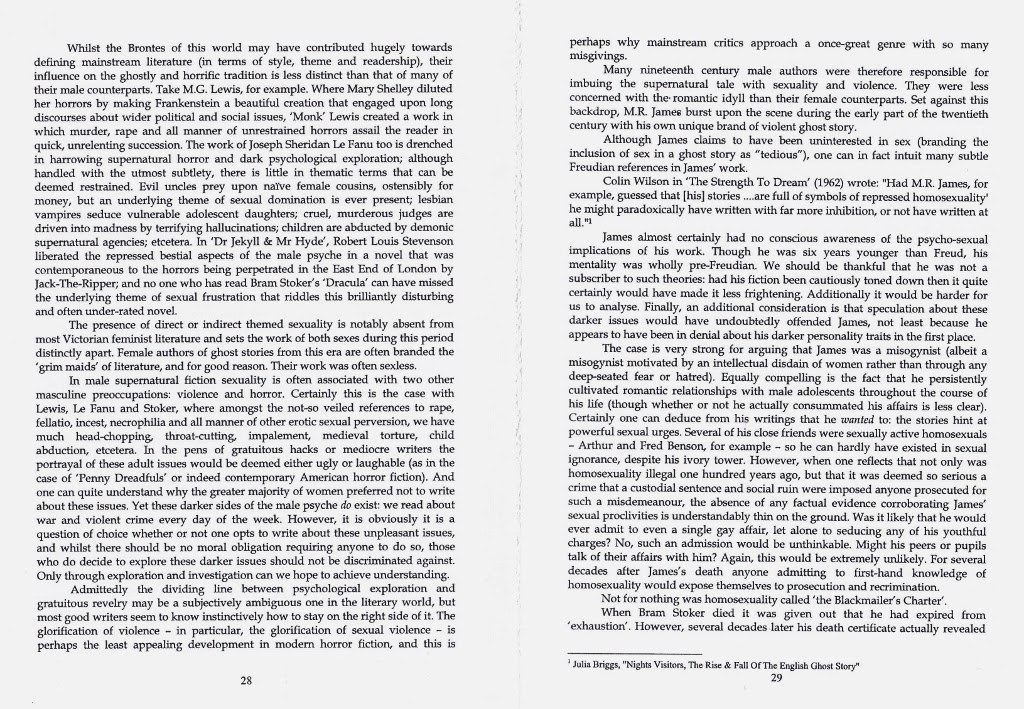 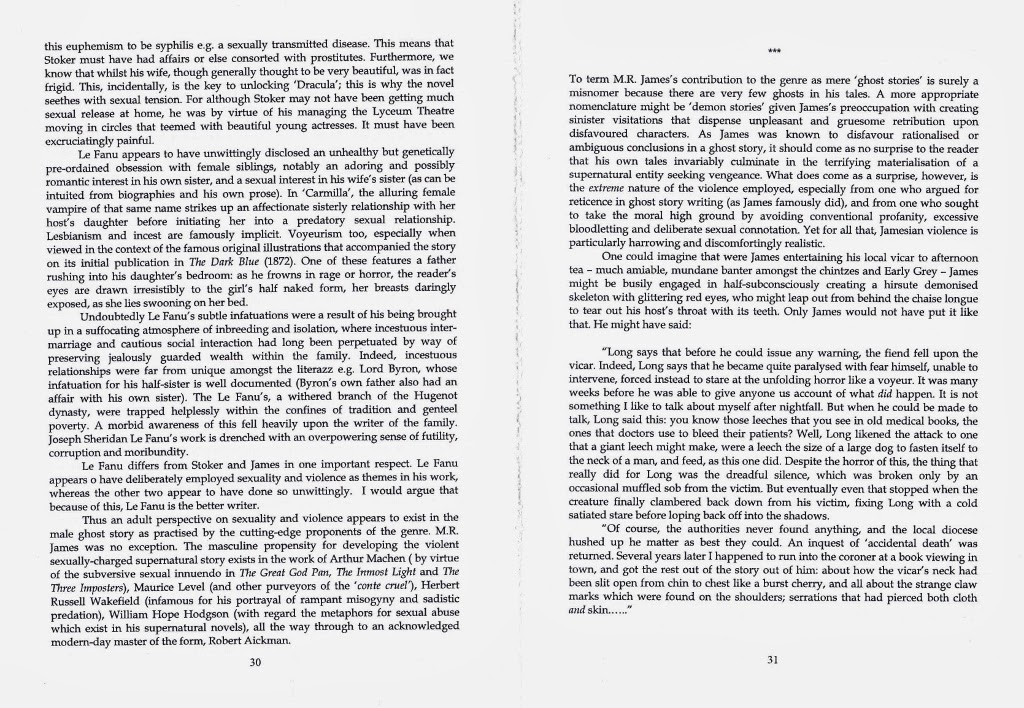 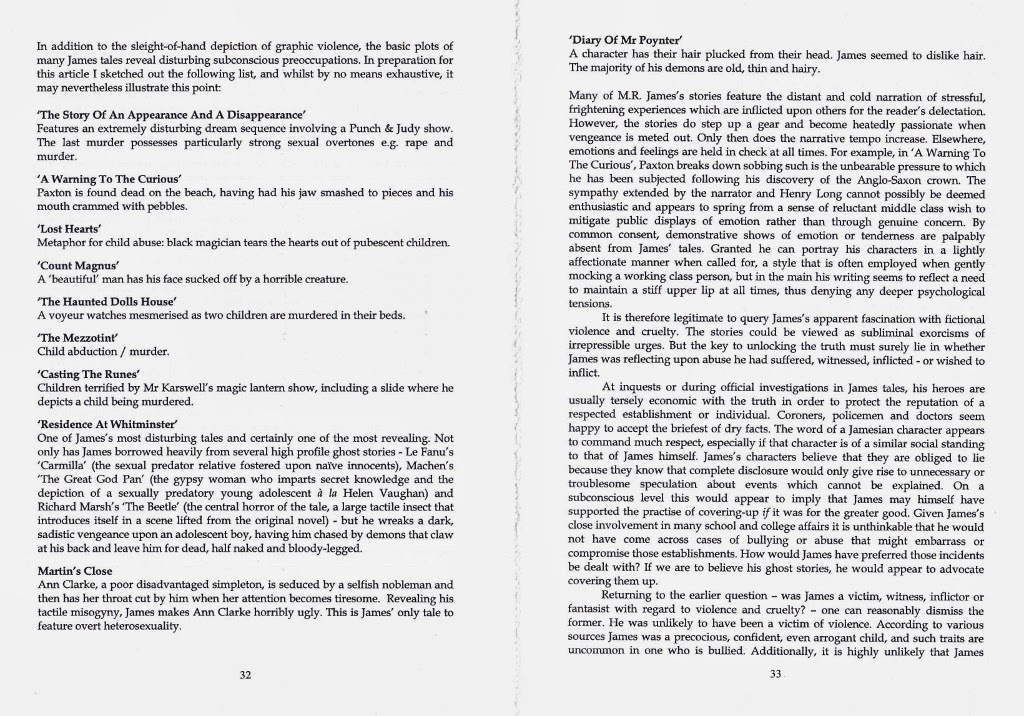 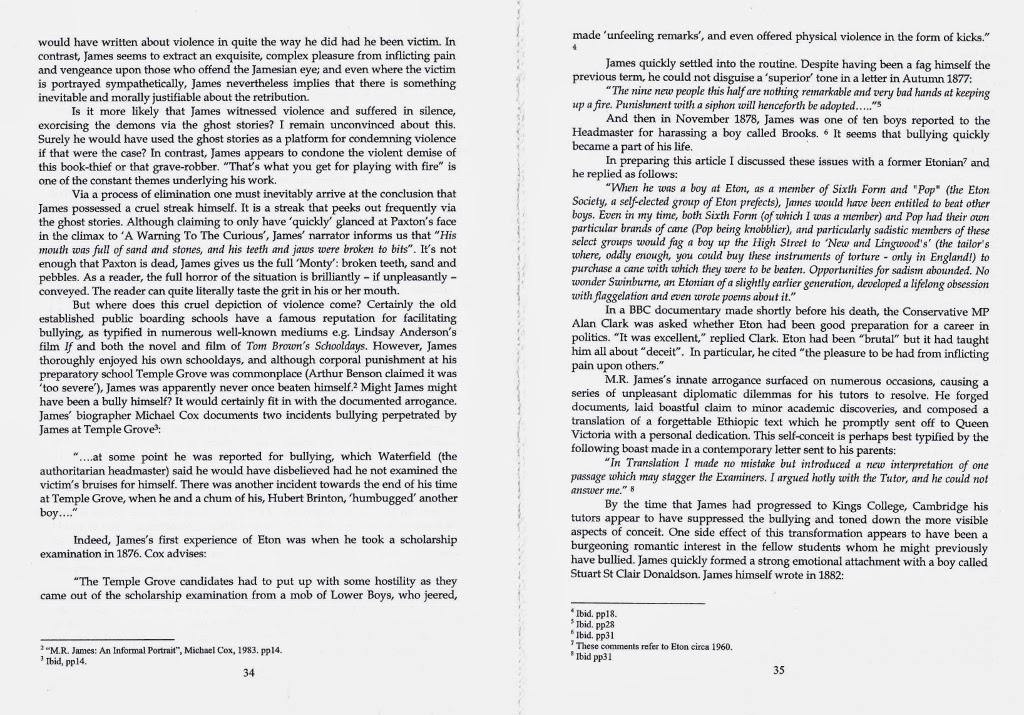 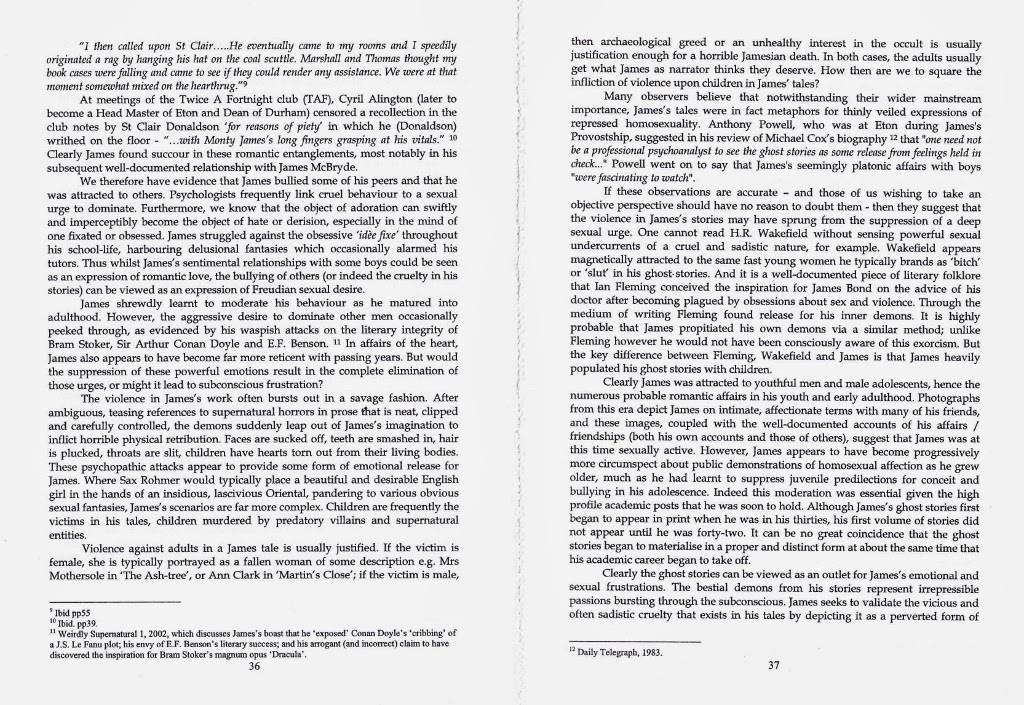 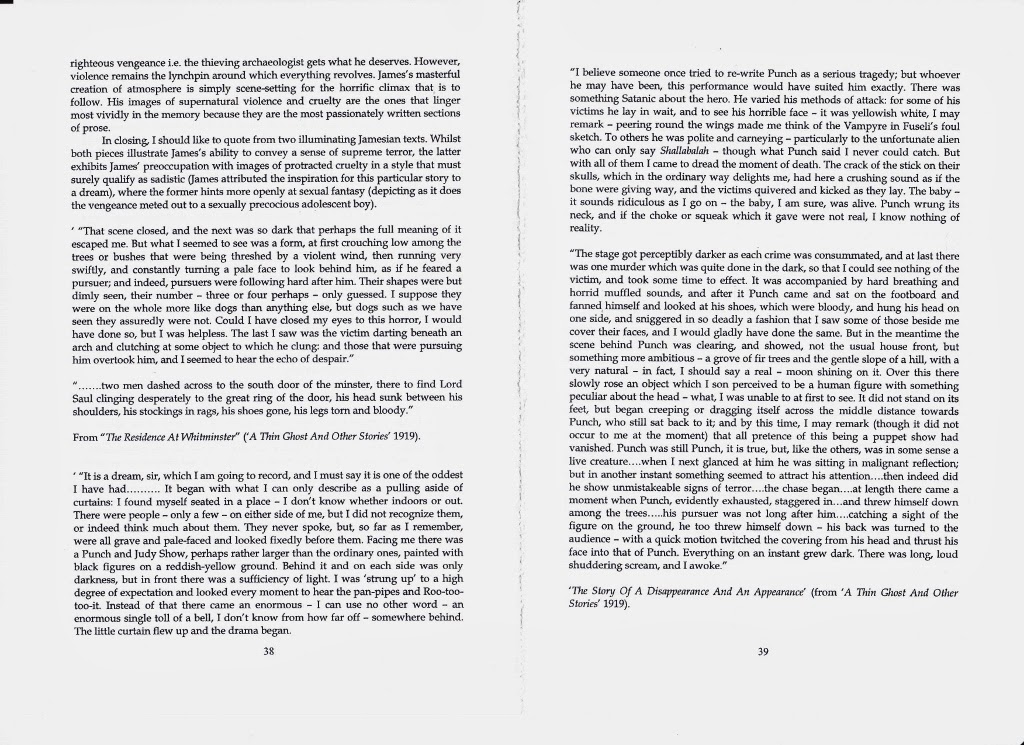 Posted by Christopher Richard Barker at 12:34 No comments: