My favourite boots are 35cm from heel to toe which means I have to sit sideways on in the car to maintain satisfactory pedal coverage. If you know of a vehicle that has been modified to allow for insanely long winklepickers - perhaps a hearse or a clown mobile - then please do drop me a line. No ridiculous offer refused. 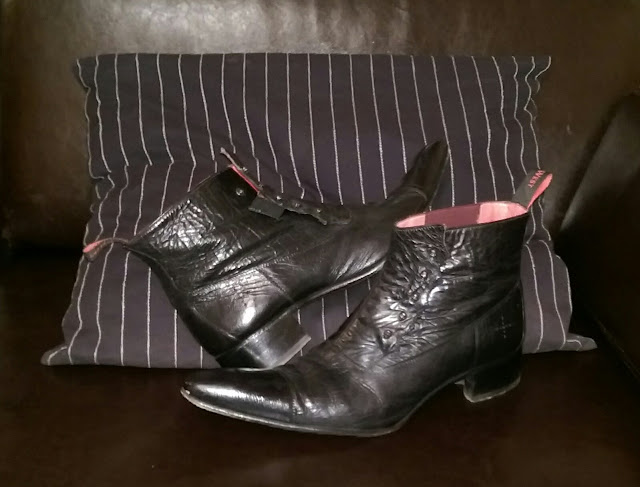 Posted by Christopher Richard Barker at 14:49 No comments:

In Every Parting The Shadow Of Death

The sentiment expressed in the following poem has become one of the many underlying themes featured in my in-progress novel, 'The Melancholy Haunting Of Nicholas Parkes'. The poem featured on a CD published by Klanggalerie last year with an ambient soundtrack by Attrition. The poem is something of an homage to Walter de la Mare. I gave a reading of it at Waterstones in Nottingham last autumn.

IN EVERY PARTING, THE SHADOW OF DEATH

“In every parting, the shadow of death….”
murmured the old man with filmy blue eyes
as I sat picking out stars
in the swooning purple skies

Glancing back from my lonely glass window
I shot him a polite, quizzical glance
Inviting further comment
- though he was plainly entranced -
for sat on his lap
all broguey and tweed
was an inanimate stuffed cat
of indeterminate breed
which he stroked and he petted
with more than gentle need.

His eyes glittered bright with a dream-haunted tear
so I offered myself up to listen regardless of fear
to that which he most wanted me to hear.

It suddenly struck me - ridiculously perverse! -
that he spoke of his cat - but quite the reverse! -
for I suddenly realised that it was ‘merely’ a soft toy
all matted and lumpy from when he was a boy!

[How many times had that been carelessly abused?
I reflected ignorantly, stupidly amused.]

I struggled respectfully to stifle a chortle and glanced instead downwards
at boots which were once ‘all the rage’
but clearly had since been cruelly beaten by age.

The moon glittered coldly from way up on high
swooning through stars in the velvety sky
whilst the cradling rock of the carriage on the track
sent electric-shock tingles thrilling across my back.

Then I recalled a tumble dryer from when I was a child
for there beneath a worktop I often did hide
nuzzling down deep into laundry-fresh sheets
to escape from the belt with which I was often beat
as the comforting shiver of the spinning electric machine
lulled me into a contented sleep happy dream.

“In every parting, the shadow of death,”
repeated my new friend, remembering sad times,
when it suddenly struck me that the toy was not his
but rather the plaything of someone painfully missed!

As the train trundled into Crewe and my friend rose to depart
In another seven words he pierced straight through my heart;
for as our eyes met we became joined at the head
and he spoke the words “Really, what more needs ever be said?”

Posted by Christopher Richard Barker at 06:19 No comments:

I am becoming a creature of habit.

But perhaps I need to get out a bit more. Or in, depending on the issue.
Posted by Christopher Richard Barker at 15:52 No comments: