Lunchtime at the Bauhaus (with Peter Murphy and Daniel Ash)

Pete Murphy lounges moodily and angular at a dinner table, waiting for his next Maxell Audio-tape advert.

DA: Well, Pete, what do you fancy for lunch today?

PM: What is there?

PM: Soup. We always have soup. I'm sick of having soup. Robert Smith doesn't have soup every day.

DA: Well, he probably gives his wife more housekeeping than I get. Besides, you're more than welcome to go out to the supermarket yourself. 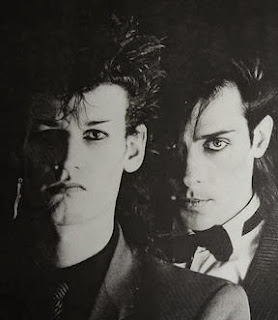 PM: Me, in a supermarket? That's hitting below the belt. Cover my face and bloated breast first.

DA (crossing arms): Well then, don't complain. Now, do you want soup or not?

PM (sighing): What soup is there?

DA: It's always the same, Pete. Cream of tomato or oxtail.

DA (testily): Cream of tomato or oxtail. Come on Pete, it isn't rocket science. It's always the same two options. They are the only two soups we both like. Pick one.

DA: Kevin isn't here. And he never cooked for you. I do. So please, pick a fucking soup.

DA: There, it wasn't that difficult, was it?

DA: And do you want anything with your soup?

[A mischievious smile twitches across Murphy's face. He favours Ash with one sideways glance.]

DA [beaming]: There, it's not so bad, see? At least we're still together. Robert Smith, he won't even send Lol Tolhurst a Christmas card, let alone make him soup, despite those fantastic drums on 'Pornography'. And as for Morrissey, well, they do say he eats his soup alone...

[DA sits down and rests his chin on his hands, gazing dreamily up into the air.]

DA: Bowie has special astronaut soup. He eats it in a special gravity-free capsule that the Swiss government made for him. The recipe is a strict secret, known only to close friends like David Byrne and Brian Eno.

PM: Does Rick Wakeman know the secret? He'll tell you anything for a pint. We could buy him a pint.

DA: No, Rick Wakeman doesn't know. Bowie thanked him for his piano on "Life On Mars" but said there was no way he was going to share his secret with a man who wears a prog-rock cape when he's doing the housework.

PM: Paul Weller says the special ingredients in the astronaut soup prevent ageing. Do you think that's why Bowie only looks 35?

DA [uncomfortably]: Erm, no, not entirely. Gosh, is that the time? I really should crack on and--

PM: Danny, why do you always change the subject when we talk about David Bowie's unnaturally youthful appearance? You did it yesterday when you were taking my blood samples.

PM [frowning]: And there's something else I've been meaning to ask you about, Danny. I bumped into Andrew Eldritch down the Social the other day, and we got to talking about this and that, and it turns that he doesn't actually have to provide blood samples to his record company every day. Nor does Hugh Cornwell, apparently. I thought you said every lead singer had to have his blood tested daily, as per record company contract?

DA [blushing]: Andrew must have been mistaken. As for Cornwell, he's doesn't have the energy to give blood *and* pursue his unhealthy obsession with groupies. That man may only be 42 but he looks 70.

PM: Danny, why do my blood samples get sent to Switzerland? I thought the NHS was based in England but last week I found a box of prepaid envelopes under the stairs, all marked "D.Jones / Zurich / Ref. Project Rejuvenate".

DA [reddening]: Oh really, did you? Ha ha ha. Well, the truth is Pete, I send the blood to a Dr Jones - that's what the "D" stands for by the way, and definitely not David - who lives in Zurich and he then analyses it before sending the results back here to your local GP.
PM: Gosh, what a palaver!
DA: Yes, isn't it? But it's proof we love you, Pete. We feed you up and send your blood to Switzerland because we want to keep you happy and to make sure you keep producing great nutritious blood for many more years to come.
PM [Frowning]: Eh?
DA: Sorry, did I say blood? Doh - I meant music! (Blushes.) Anyway, the time is getting on and you need to keep your strength up. Now, tomato soup, wasn't it?

DA [beaming]: Good boy, Pete. And I'll rustle up some Angel Delight for afters. How does that sound?

PM: Well, certainly better than a kick in the eye.....

[Both laugh.]
PM: Or a rose garden funeral of sores.
[Chortles.]
PM: Or even a spin in Dalis Car!
DA [miffed]: I wouldn't know, would I Pete? That was just you and Karn.
Posted by Christopher Richard Barker at 10:24 No comments: 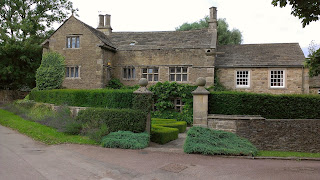 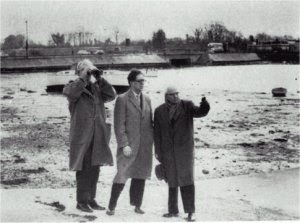 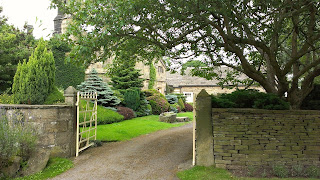 Posted by Christopher Richard Barker at 13:17 No comments: