A mere seven years after its original publication by Ex Occidente Press, my collection TENEBROUS TALES is finally available as a paperback.

[Coughs awkwardly. I've been rather busy.]

The book opens with the 50 page novella 'The Melancholy Haunting Of Nicholas Parkes' which is heavily drawn from the life, music & tragic early death of the brilliant Nick Drake. This is the story I have been expanding into a three-volume novel. It is for all intents and purposes finished but at 1,500 pages long requires very careful editing before I dare start inflicting it upon agents or publishers. Furthermore, the novel features a new poetry collection by a fictitious poet together with lyrics for a couple of imaginary concept albums, all of which are central to the plot of the book.

I am probably deluding myself but I think that this project will be something very special indeed, even if it does fly in the face of  the current vogue for short novels. In bygone years I often had to grind prose out at a tortured pace but ever since my liberating life-saving organ transplant in 2011 I have been able to write at a phenomenal rate. Any voice, any style, any format - bang, I just need to sit down at a computer and let fly, and out it pours. What's more, it has been a very pleasant surprise that I have been able to maintain the same brisk narrational pace in a 500,00 word novel that I strive for in a short story.

['Yes, Doctor, I haven't forgotten to take my pills. And no, I haven't been chewing the padding in my cell, that was my invisible musician friend, Nick. He keeps picking at the walls with his long dirty fingernails and scowling darkly at me from the shadows. He's very angry, you see, because I won't go with him - not yet at least. It's in his eyes, a filthy dark mordant smoulder.']

Anyway, TENEBROUS TALES received excellent reviews when it was first published, and received the weird accolade of having the longest review for a work of fiction ever published by the British Fantasy Society. My Nick Drake story was short-listed for Best Short Story of the year at the time but I requested it be withdrawn from consideration for reasons lost in the shadowy mists of time. Ellen Datlow, in her review of that year's best speculative fiction, singled out four of the stories for 'Honorable Mentions'. The book also features an excellent introduction by the incomparably talented Reggie Oliver.

UPDATE: Humble and sincere apologies to anyone who bought a copy between 8th - 9th March. Some of these featured several dropped indents. This issue has since been resolved. The book has also been scaled down in size from 'coffee-table' format to merely large paperback size. If having bought this version you would like a refund then please contact me. To add value to the new paperback edition the price has been lowered and two new stories have been added e.g. 'The Mine Field' and 'The She Queen Of Sif'.

Turns round to clip Igor's ear.

Igor (voice of Claude Rains): "Sorry, Master, I will not fail you again."

Me: "No Igor, you will not. Look behind you. I have appointed a new man-servant."

Igor (sharp intake of breath): "Jean Shrimpton? But Master, what does Jean Shrimpton have that Igor does not?" 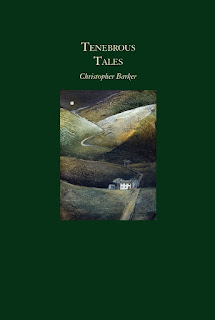 Posted by Christopher Richard Barker at 04:30 No comments:

[The following manuscript fragment was recently found in Evelyn Waugh's papers, perhaps predicting the future of Modern Art. It is believed to be part of an unpublished sequel to 'Vile Bodies'.]

The party ended abruptly when Agatha Runcible led a congo-dancing crocodile of inebriated revellers out of the front door and down to the Houses Of Parliament to demand greater funding for The Arts. Suddenly finding themselves alone in the Serpentine Gallery, and feeling somewhat mollified about the embarrassing incident involving Ginger's whiskers, Nina decided to set a good example by tidying up while Adam searched fruitlessly for the caretaker. Procuring an apron and a dust-pan and brush from a cupboard marked 'Private', she flitted about the room humming the same tune they had danced to at the Cafe Rouge several hours earlier.

"My god, Nina, what are you doing?" cried Adam when he returned to the room.

"Tidying-up. I've always wanted to. Do you like my apron?"

"No, it makes you look like a Bolshevik. But the point is, darling, that you've rather 'tidied up' all of the new exhibits." Adam marched across to the radiator, gesturing. "Don't you remember 'Tea Bags Drying'?" He pointed to a section of freshly-swept floor. "Or ''The Despondent Desolation Of A Scrunched Up Cigarette Box?'" Adam then walked across the room to a glass table now gleaming with polish. "And what about the 'Dust: I Was Here' exhibit? It was heralded as the dawning of a new epoch in modern realism by The Daily Beast and now you've swept it up."

Nina blushed. "Oh dear, I don't suppose that's a terribly good thing, is it? In fact, I suppose, if anything, it might even be a rather bad thing...."

A flash of inspiration suddenly glittered in Adam's eyes. He snapped his fingers. "I know, we can make some new ones. Where did you put the rubbish?"

As Adam busied himself creating a pyramid of cigarette ash surmounted by a spire of twisted cigarette stubs on the glass table, Nina draped some soiled handkerchiefs over the back of a Bauhaus chair which she had procured from another room.

Unfortunately it had proved completely impossible to retrieve the tea-bags for they had burst open into a squelchy mulch at the bottom of the litter bin. In their place on the radiator she spelled out the word 'Anomaly' with broken match-sticks.

"Because I didn't have enough matches to spell 'anonymous'."

Ten minutes later Adam was gazing back into the room surveying their handiwork, his hand poised over the light switch. "I do hope we won't get into trouble," he said. "Artists spend several years learning how to become artists. I can't help but feel slightly guilty."

Adam frowned. "But you're still wearing the apron."

Nina attached a fake twirly moustache to her upper lip and giggled. "It's my disguise, silly. In case we get stopped by a policeman."

But they needn't have worried. When the Director of the gallery turned up the next morning with the Minister Of Arts And Culture and last week's Prime Minister for an informal viewing of the critically-applauded new show that everyone was talking about, he stood open-mouthed on the thresh-hold, shocked surprise gradually giving way to enraptured awe.

"Truly we are at the Dawn Of A New Age!" he cried, clapping his hands together in delight. He turned round to stare at his bemused guests. "Please tell me you can see it?"

The Minister For Arts And Culture had until very recently had been an assistant manager at a small museum dedicated to rural agriculture in a Devon backwater. In truth his sudden and unexpected appointment to high office had more to do with an administrative faux-pas than his knowledge of Art, which was, if anything, less than slight. His name was Brown, and like many Browns, people were often mixing him up. However, what Brown lacked in knowledge he more than compensated for in evasive diplomacy (which was why he was confidently predicted To Go Far).

Last week's Prime Minister merely grumbled something unintelligible and non-commital. He had missed breakfast because his boiler had packed-in, and not being Prime Minister any more meant that he had to pay for the repair himself. Indeed, he had been volubly fermenting upon the outrageous cost of plumbing in the metropolis when Sir Basil's chauffuer had called for him.

The Director of The Serpentine walked excitedly into the room to explain the Concept to his prestigious visitors, one hand tucked into his waistcoat pocket, the other gesturing authoritatively.

"It would appear that the artists returned to the Gallery last night to create new pieces of contemporary art," he informed them. "How truly innovative! Art as a dynamic state of conscious realism, in fact. See here how they ruthlessly castigate Architecture Run Riot, with their subtle construction of ash and tobacco? And there, the draped linen, soiled perhaps with the stain of Lost Humanity?"

Spinning on his heels - heels that last week's Prime Minister thought indecently high for any Englishman to wear in public - he turned to face his guests.

"And we three - what, mere functionary mortals? - we and we alone have been granted the first privileged glimpse into the future of modern realism! Is it not exciting? Does it not thrill you to the very core of your being?"

Last week's Prime Minister looked doubtful but he had high hopes of Sir Basil suggesting an early lunch. Glancing uncomfortably at his companion, he replied cautiously. "Of course, Sir Basil. It's very impressive."

The new Minister for Arts And Culture was left temporarily speechless. After a moment he spoke.

"I can only echo that," he said miserably.

Which of course was true.


Posted by Christopher Richard Barker at 04:26 No comments: