"Now we rise and we are everywhere" 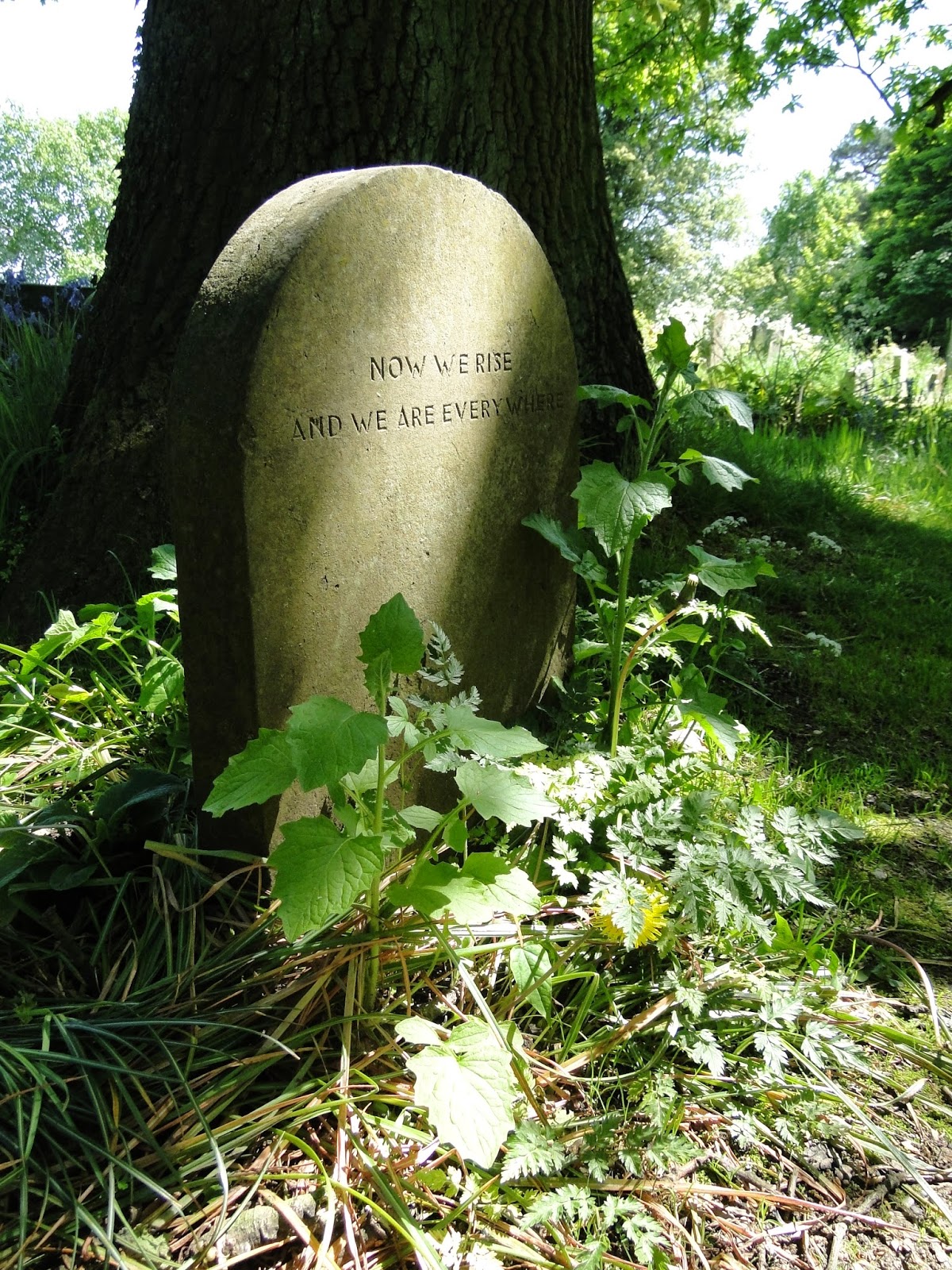 The headstone on Nick Drake's grave

Somewhat accidentally, we found ourselves passing temptingly close to Tanworth-in-Arden last weekend, en route to the sublime Pre-Raphaelite splendour of Whitewick Manor. The opportunity was too good to miss, although I do have strange anxieties and superstitions about visiting or returning to places I have written about, especially when the literary intention was to explore dark and ambiguous psychological issues. For example, there is a small, unconsecrated church in Cockley Cley, wherein lies a small, barred relic pit, which even to this day fills me with thick, nauseous dread...but enough of that.

[I fictionalised the story 'The Tableaux' sometime back, and further attempted to visualise the imagined horror via a home-made video, now - thankfully - lost in the annals of forgettable self-promotion.]

Drake's grave is easy to find if you have read any books about him, or have seen the interesting documentaries "A Skin Too Few" and "A Stranger Among Us". I won't name the church because it doesn't deserve the plug given that IT WAS LOCKED. [Personally, I think the least that the immensely wealthy Church Of England can do is to ensure that all churches are kept open during daylight hours so that anyone can visit or indeed seek temporary respite.]

The grave is exceptionally modest. Drake's ashes have been interred along with those of his parents, Molly and Rodney Drake, both of whom, tragically, succeeded him. There is a polite sign attached to the trunk of an adjacent tree. 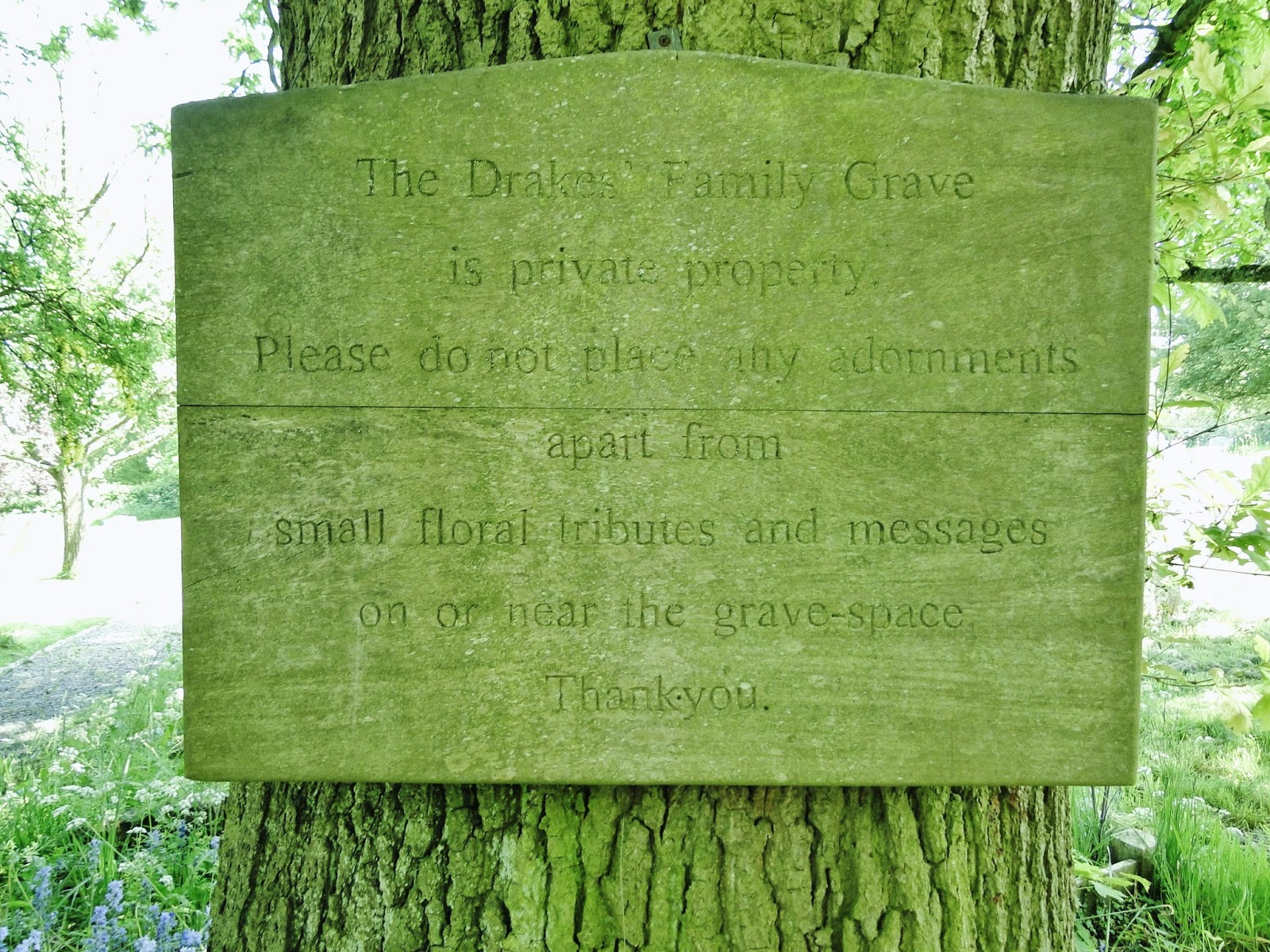 Scattered upon Drake's grave are a small number of inscribed stones and pebbles, in quiet defiance of the request that only 'small floral' adornments be left. One is an attractive black stone love-heart to which has been affixed a silver cross, featuring the words "In Erinnerung an einen wundervellen Menschen", which, I have been reliably informed, means "In memory of a wonderful person". 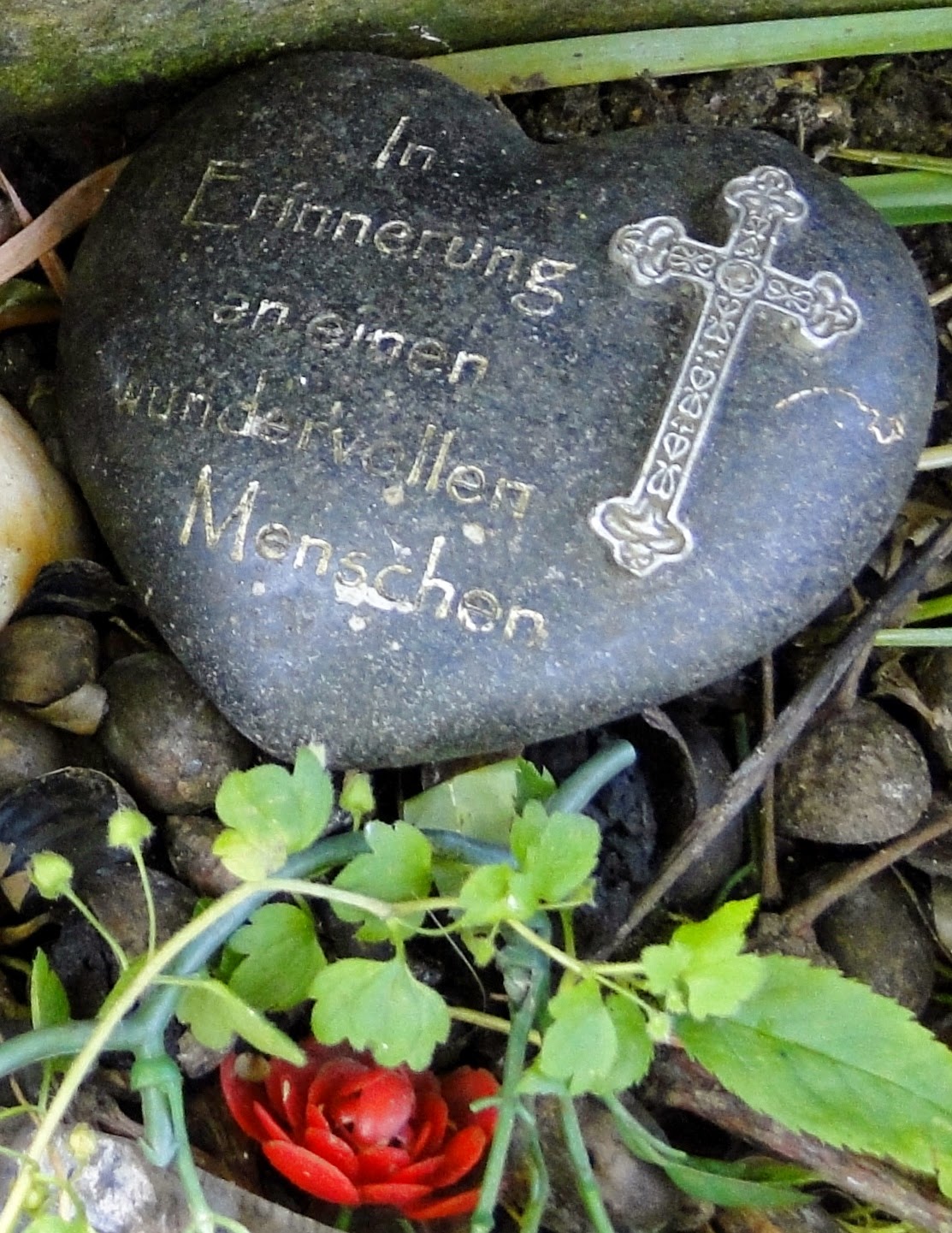 "In memory of a wonderful person"

Personally, I find tributes of this kind acceptable, provided they are modest and elegant. But then again, I am not family, and I could quite understand why others closer to Drake might not. The wishes of Drake's surviving family should come first, especially as the grave is shared by two other relatives. Beyond that, the church should be left to decide [despite the fact that they lock their doors gnash gnash gnarl gnarl].

As I say, usually a sense of dread and trepidation falls upon me when visiting such places, for I heavily fictionalised the life, death and haunting of Nick Drake in my story 'The Melancholy Haunting Of Nicholas Parkes', and I was anxious lest any attendant spirit take a dim view upon my attempt at artistic license. After all, the inspiration for my short story came from the epitaph on his headstone, which may serve as some kind of apocalyptic warning:

"Now we rise and we are everywhere."

Indeed, Joe Boyd wrote to me that he was uncomfortable with my take, questioning the need to romanticise Drake's memory. Furthermore, I am currently midway through expanding said story into a long novel, and had the not unreasonable anxiety that the not-so departed spirit of Nick Drake might cast a dark spell over my endeavours, to ensure that not only would my project fail, but that I might trip upon the steep slope leading down from the end of the graveyard, or be trampled underhoof by a herd of possessed bulls in the gently sloping fields behind Far Leys. However, despite these concerns, I enjoyed the strange pilgrimage, and came away feeling content and rewarded.

The locals we encountered seemed pleasantly ambivalent towards our presence but that is probably because we are refined, polite people who have due regard for the privacy and wishes of others. [I speak mostly for myself here; to be perfectly frank, I harbour slight reservations about the politeness of my partner, who - being a North person - is often a tad too blunt for my affected sensibilities]. And I am glad that the wishes of Drake's family have mostly been adhered to, although I do fear that it is only a matter of time before those wishes are infringed.

Of course, when I refer to 'fear', I refer to the fear that those who disregard such wishes shall experience, for quite obviously the place is haunted, and Drake's unforgiving spirit will take vengeance upon those careless of both his family's wishes and their own lives.....
Posted by Christopher Richard Barker at 11:26 4 comments: